The High Dynamic Range allows a significantly improved image. The pixels that compose the image are high quality compared to the current pixels, with more information content. The signal reproduced on the new HDR screens is more dynamic and therefore with a much higher brightness, as well as with a superior detail perception. The Rai Research Center, along with the BBC, NHK and other European research organizations, are long following the evolution of HDR systems, which certainly represent a strategic and long-term project. 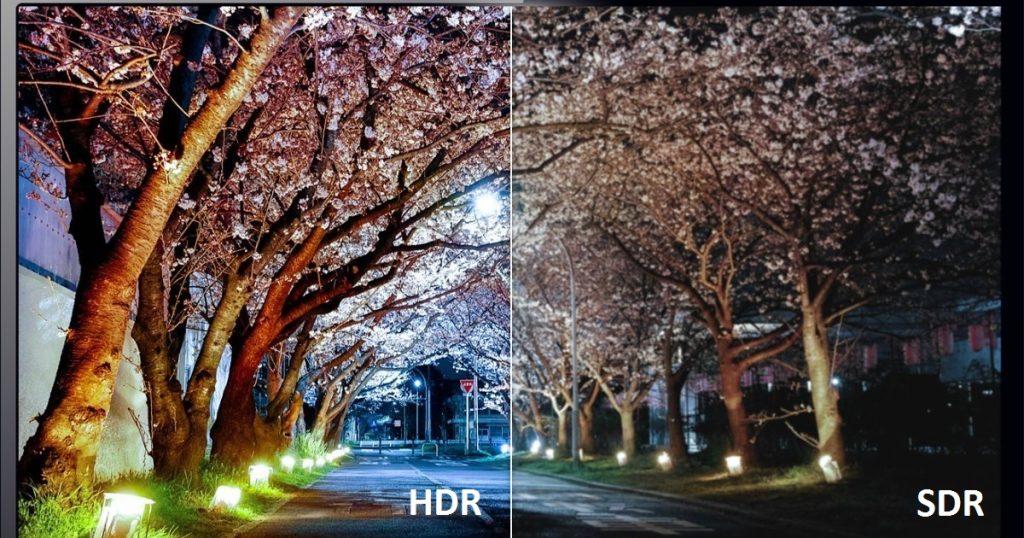 HDR – High Dynamic Range – is a technological evolution that can be synthesized with the phrase “not just more pixel but better pixel”, improved quality not increasing the number of pixels and therefore of the resolution, but with better quality pixels. The most evident feature of HDR images is the extension of the dynamics, which allows to perceive more gradations between light (the so-called highlits: reflections, lights in the stadium, car lights…) and dark; therefore the dynamic range increases, ie the ratio between the highest intensity white pixel (measured in cd/m2, also called “nit”) and the darker one inside an image. The measurement unit that is often used, borrowed in the photographic world, is called ‘f-stop’ and it is logharithm base two of this ratio.

The HDR technology impacts on the production and distribution workflow, from the shooting, to the encoding and trasnmission system and to the television.

The HDR requires high quality cameras, which actually are used for film shoots, because they have to be able to acquire images with a wider dynamic range and range of colours, in order to exploit the quality advantages in post-production. So it is needed to record the signal with suitable recording formats, possibly in raw format (linear 16 bit) or quantized with an appropriate non-linear function (OETF) with signals depth of at least 10 bits, on order to perform editing, color grading and mastering for the HRD images without introducing perceptible distortions on the finished product. These recovery systems have a higher dynamic than the traditional one: about 14 f-stop compared to 5-7 f-stop SDR (Standard Dynamic Range).

New consumer displays are equipped with a higher dynamic range and they are able to offers images with a higher details level, which allow the user more involving vision experience. The advantage of HDR is not only the better contrast, resolution or colours level, but also the ability to combine all these factors to play the images in a more accurate way. This offers more possibilities to the contents creators to represent the reality in more real way. Current SDR televisions have a brightness peak of about 200-300 nit. New displays, instead, equipped with Ultra-HD (4K/UHD) and High Dynamic Range (HDR) resolutions, reach 1000-1500 nit!

Current color space, which defines the number of reproducible colors, defined by the  BT.709, does not allows to reproduce all colors that the human eye perceives, so it has been introduced the BT.2020 regulation containing a definition of primary colors that allows to cover a greater part of the visible shades. With new BT.2020 compatible televisions, it is possible to reproduce on the consumer displays shades of colors that previously could not be displayed, especially in the range between green and cyan, closer to the artistic intent of the photography director and the director.

When we talk about HDR, it is necessary to describe the so-called transfer functions, indicated by OETF and EOTF acronyms:

The OETF opto-electronic curves in HDR are able to manage signals with a wider input dynamics: they are mathematical functions able to redistribute bits in order to valorize variations in dark tones and half tones, where the human eye is more sensible compared to the light tones. They are used in order to encode the signal with the least possible number of bits according to the perceptual characteristics of the human eye. The EOTF curve, instead, has to invert the OETF curve, than the signal is ‘linearizated’ to be shown on the display.

The EOTF curve used in traditional SDR TV, called 2.4 range (exponential function with 2.4 exponent), is well adapted to human perception for low and medium low levels, but not for high levels where the perception follows a logarithmic type law. For this reason, other curves have been standardized:

The Rai Research Centre has been experimenting this technology for some years with the creation of video footage, in close collaboration with the company’s production structures, in order to define a valid production paradigm from the shooting to the research of working and interchange formats of various contribution of the productive chain, to get the tests on new displays both professional and consumer. The Naples Production Centre is applying the HDR format to the Alberto Angela’s special productions and, in particular, ‘Stanotte a Venezia’, which, after the  4K boradcast, will be broadcast in UHD HDR in Rai’s premiere.

More pixels or best quality pixels? The problems of a higher resolution signal against an improved quality signal. The challenges of Rai and Reserch Centre towards a high technical quality television.