A single-frequency DTT transmitters network  requires a time-frequency reference that is available and unique in all the affected stations in the network [1]. Up to now the GPS, which meets the above requirements, is the commonly used system; however, GPS is a source of synchronization provided without any warranty, and is controlled by a third party not bound by any contract. The problems related to synchronization by GPS, and GNSS in general (interference, even intentional, dependence on the provider, etc.) are well known to broadcast operators.

In order to guarantee the continuity of the broadcast service, the main national broadcasters are interested in finding complementary solutions, in order to have a reliable and precise synchronization system.

With the DEMETRA system, time and frequency references are distributed via a non-dedicated geostationary satellite. The proposed technology, which is based on consolidated telecommunication techniques (FDMA), allows the dissemination of time and frequency references using a normal geostationary satellite and a set of satellite service stations for the estimation and transmission of correction data. The correct time alignment is based on the transmission of a signal that contains timing information, the location of the receiving stations and the actual instantaneous position of the satellite (as noted, geostationary satellites are affected by (small or large) fluctuations of the position with respect to the nominal, due to orbit errors, gravitational interactions with moon and sun, solar wind, etc.)

The proposed system does not require dedicated satellites and, thanks to the use of a spectral band different from that used by GNSS systems, allows a significant reduction of interference due to interference.

This system is however designed to work in parallel with GPS and GALILEO systems, thus obtaining complete technological redundancy: this is particularly suitable for SFN DTT networks, which require high reliability and a timing accuracy of the order of 100ns.

As part of the DEMETRA project, funded by the Horizon2020 program, which sees as leader the National Institute of Metrology (INRIM) of Turin, Antares S.c.ar.l. has developed a demonstrator for the synchronization of Time and Frequency, an alternative to GNSS (Global Navigation Satellite System), intended for professional users who need precision timing in the order of nanoseconds, therefore more than adequate for the case of broadcast transmitters networks . 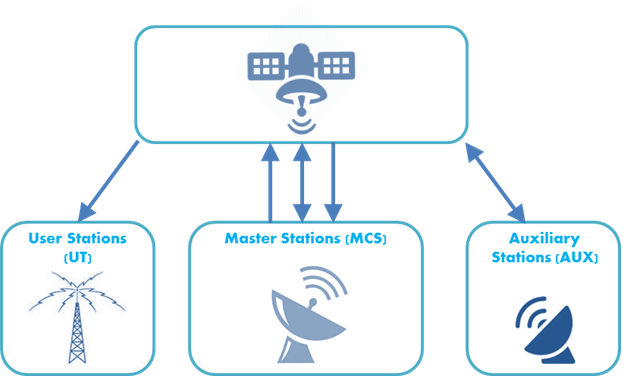 The purpose of the tests was to verify the possibility of using the time/frequency references distributed via geostationary satellite, according to the methods devised and developed within the Demetra project (hereafter “Rif Demetra) to support and/or to replace what today it is obtained through GPS (hereafter “Rif GPS”) in the applications used by Rai, in particular we want to try to use Rif Demetra in a network of single frequency DTT transmitters (SFN) [1] in which part of the modulators use the conventional Rif GPS.In order to achieve this purpose, an appropriate measuring bench was set up which also allowed the Demetra Rif deviation to be verified with respect to a conventional GPS Ref using the phaser meter, a device specially designed for this kind of measurements.

In a nutshell, it can be said that the system, although still in a prototype phase, has shown very promising performances. The system, under normal operating conditions, actually allows to obtain a precision of the timing in line with what was estimated by the designers/developers, more than sufficient for broadcast applications. The time / frequency references obtained make it possible to set up a single frequency DTT network both in the case of exclusive use (“Demetra only” timing) and in the case where mixed GPS / Demetra timing is used.

In Holdover conditions, the drift of the timing was however of an order of magnitude lower than that obtained on professional GPS devices analyzed at the time, which denotes an internal oscillator of high quality.

The criticality found on the system, in the context of its use for SFN networks, concerns the presence of some “skids” to the re-hooking of the satellite signal that presumably could be due to a management of the oscillator not yet well optimized. Furthermore, it has been noted that the speed of reset of the alignment following a Holdover event is excessive: this denotes a too high deviation of the oscillator frequency to 10MHz, which may cause an excessive deviation of the transmitter carrier frequency. , with possible disservice. However, in the case of specific broadcast use, the system can easily be reconfigured to meet the needs highlighted.