Application of the WiB concept to DVB-T2

WiB is a new system concept proposed for DTT (Digital Terrestrial Television), where potentially all UHF channels allocated to broadcasting services are used from all transmitter sites, thus having frequency reuse-1 (even around National Borders), instead of frequency reuse 5 to 7 as adopted in “conventional” DTT plans. Interference from co-channel surrounding transmitters is handled by a combination of robust transmission modes, wide-band carrier aggregation, directional discrimination of the receiving antenna and, when required, sophisticated interference cancellation methods. All those use-cases must be carefully evaluated against the strategic and economical drivers, under the pressure of on-demand video services distributed over optical-fibers and of TV services distributed by satellites. 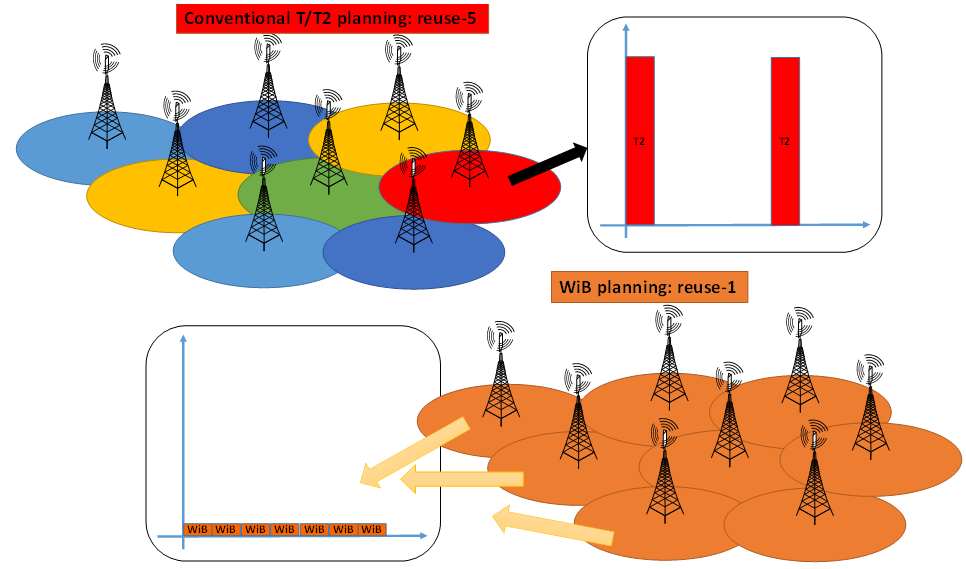 Currently, when a digital terrestrial TV signals (DTT) is transmitted from a specific transmitter TX1 in a frequency channel CH1, all the neighbour transmitters (TX2, TX3,…, TXN) cannot re-use the same channel CH1, to avoid mutual interferences, and thus N channels are required to cover a whole Nation or Continent: this frequency planning strategy is technically named Frequency re-use N, and implies that to provide a single DTT signal everywhere N channels are required [1]. A new system concept for DTT, called “WiB” (Wide Band Frequency Reuse-1) [2], has recently been presented in Conferences and to DVB, where potentially all UHF channels allocated to broadcasting are used from all transmitter sites, thus having frequency reuse-1 (even around National Borders), instead of frequency reuse 5 to 7 as adopted in “conventional” DDT plans. Interference from co-channel (non SFN) neighbour transmitters is handled by a combination of robust transmission modes, directional discrimination of the receiving antenna and, when required, sophisticated interference cancellation methods. Thanks to the adoption of more robust modes, WiB allows for a dramatic reduction of transmitted power, thus offering lower network costs and reduced electromagnetic pollution.

To compensate for the reduced MUX capacity (bit/s/Hz) with respect to that offered by conventionally-planned DVB-T / T2 broadcast signals, WiB may operate a sort of “carrier aggregation”, merging a number of adjacent channels (up-to the entire UHF band allocated to broadcasting). This has the benefit to allow for narrow-band interference mitigation, increased frequency diversity and better statistical multiplexing gain, but has the drawback to require new standardisation effort and new receivers.

The work starts from a planning exercise for a regular ideal broadcast network [3-6], comparing the WiB and conventional planning approaches in terms of spectrum and power efficiency. Both the introductory phase, when neighbouring countries are conventionally-planned, and the final phase, when WiB-planning is adopted in all Countries, are considered.

The work will then consider real Italian scenarios at specific test points, with the objective to verify the results of the ideal scenario.