As a result of the growing diffusion of broadband services and the consequent increase in the demand for  spectral resources, the technological evolution of telecommunications is constantly directed towards the development of new techniques that enable the use of the electromagnetic spectrum more efficiently. Among the possible alternative data transmission approaches, those employing different modulation schemes, techniques that exploit spatial/temporal diversity such as, for example, MIMO (Multiple Input Multiple Output) systems, are considered. In addition to the aforementioned techniques, new methods have been proposed in recent years, based on the physical properties of the signal and concerning the use of the so-called vortex waves. These beams are electromagnetic waves able to carry a finite amount of Orbital Angular Momentum (OAM), a physical property of the electromagnetic radiation, widely known in Optics [1] and only recently considered for applications in the radio domain. 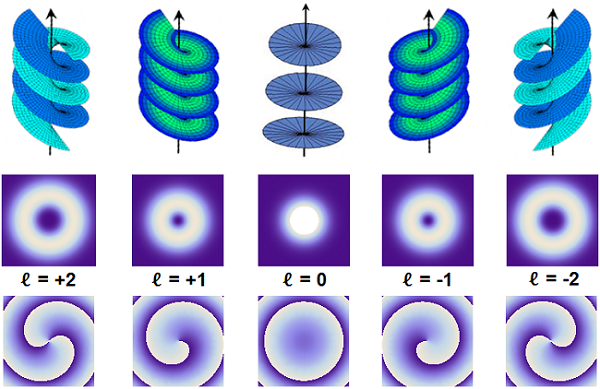 OAM beams can be generated by means of proper electrical/spatial phase-shifting techniques and are characterized by the presence of an vortex on the propagation axis, where the intensity is zero and the phase is undefined. As a consequence, OAM waves show a doughnut-shaped intensity profile and twisted wavefronts, which consist of |l| intertwined helices, being l the so-called azimuthal index. In particular, for l = 0, the corresponding mode is not helical and the wavefronts are multiple disjoined surfaces; for l = ± 1, the wavefront is a single helical surface, with a pitch length equal to the wavelength; finally, for greater values of l , the wavefront consists of |l| twisted helices, with the pitch length of each surface equal to |l|*lambda.

In the recent years OAM waves have found considerable applications in different research fields, such as Optics, nanotechnologies, astronomy, laser physics, quantum cryptography and quantum information. Moreover, the orthogonality among vortex modes with different azimuthal index has suggested the idea to exploit the OAM in the context of wireless communications, as a means to increase the capacity of a free-space link. This possibility has initially involved the field of optical communication [2], and only recently it has been extended to the radio domain, where the OAM has been presented as a good candidate to cope with the growing demand of spectral resources in the context of wireless communications [3]. The idea behind this application lies in the possibility of using two or more incoherent beams, transmitted on the same frequency but coded in different states of the orbital angular momentum, to simultaneously transmit and decode independent channels on the same carrier frequency.

However, the peculiar intensity profile of the OAM waves and the intrinsic limitation to the maximum  number of subchannels that actively convey the information in a communication link, have immediately raised doubts on the supposed advantages of an OAM-based communication technique over the pre-existing standard methods, opening a quite heated debate on this subject.

The possibility of exploiting the OAM in radio communications has been deeply investigated at RAI-CRIT, in collaboration with the University of Torino, Department of Physics, by means of several numerical studies, experimental analyses and theoretical considerations [4-9]. Focusing on free-space radio transmissions between antenna arrays, a formula for the link budget estimation, which generalizes the Friis equation to the case of OAM communication links, has been derived [5,6]. This expression turned out to be very useful for the characterization of the experiment realized at RAI-CRIT, where an OAM multimode transmission of DVB-T signals between facing Uniform Circular Arrays (UCAs) has been successfully performed, showing a sufficiently good mode insulation over a distance longer than three times the far-field range [7,8]. In particular, two different TV streams with high-definition (HD) audio/video programs, previously stored on a PC, were sent to two DVB-T modulators, where a 16-QAM modulation scheme with code rate 3/4 was adopted; then, the two signals were simultaneously encoded as OAM modes with indices l = 1 and l = -1 by means of a properly designed OAM encoder, and transmitted through an UCA made of four Yagi-Uda antennas. At a distance of 40 m from the transmitting array, a receiving OAM decoder allowed the discrimination of the signals by separating the OAM components and sent them to two identical commercial DVB-T receivers. In correspondence of an optimal antenna pointing, the insulation between the two OAM channels was estimated around 15 dB,  thus allowing the simultaneous and correct reception of the two TV programs.

However, although this experiment has demonstrated the possibility to simply implement a low power (1mW) multiple transmission of vortex waves using UCAs properly fed with a dedicated beamforming network, at greater distances the reception will be seriously impaired by the over-quadratic power decay with distance which characterizes the OAM beams.

Hence, vortex waves cannot be employed in long distance communication, and an OAM-based multiple transmission can be classified as a particular kind of spatial multiplexing. A direct theoretical comparison with the pre-existing MIMO techniques has revealed how an OAM multiplexing scheme provides the same performance in terms of spectral efficiency as the conventional methods only for perfectly on-axis LOS transmissions [9]. The presence of small misalignments in the communication link highlights the robustness of the traditional techniques, due to the strong sensitivity of the OAM orthogonality, which enables a correct discrimination of the vortex beams only when the transmitting and the receiving systems are facing each other perfectly. However, it is important to note that, in the context of a line-of-sight communication link, adaptive beam-forming techniques could be adopted to improve the alignment of the transmitting and the receiving systems, with the aim of restoring the on-axis performance. Hence, in conclusion, OAM modes could be used as an alternative basis set for transmitting signals in the context of MIMO communication, within specific short-range LOS scenarios, taking advantage of the technical simplicity of the generating methods.

Finally, the propagation of OAM modes has also been investigated in waveguide scenarios, where possible benefits of technological nature could be achieved in contexts characterized by a circular symmetry, such as circular and coaxial launchers, optical fibers, etc.