Mobile shots of sporting events (such as cycling or marathons) provide that signals from mobile vehicles, typically motorcycles, converge towards the so-called bridge-aircraft. On board the aircraft the various contributions are combined in a single flow and then sent to the Royal Mobile. In the latter it “packs”, according to the needs of the moment and the availability of the single contributions coming from the mobile means, the signal that will be sent to the satellite station for sending to the broadcasting center for the subsequent television broadcasting .
In the past, the connection between mobile means and bridge aircraft has already been analyzed and optimized, whereas the activity briefly described here concerns the connection between the bridge aircraft and the mobile direction.

Currently the system used a DVB-S modulation. An omnidirectional aerial (aerial) or a self-pointing directive antenna (helicopters) can be used on the mobile means. The receiving station is equipped with a system that includes a high gain parabolic reflector antenna with automatic tracking tracking by GPS telemetry. In order to evaluate the efficiency of the currently used system, a series of laboratory tests were carried out.

First, the performance of the transmission system under ideal conditions has been calculated theoretically: the value of the signal-to-noise ratio (C / N) required for the correct reception and sensitivity of the receiver has been identified. The various measuring desks needed to evaluate the sensitivity and C / N at the reception threshold have therefore been set up.
This first phase of laboratory testing has made it possible to identify some of the critical problems present in the reception system, quantifiable in 3dB of deterioration respect to expected performance, which is equivalent to having an operational distance equal to 70% of the potential. The company supplying the system, requested in this regard, resolved the problems identified: a further laboratory session allowed to verify the performances that were perfectly in line with the expected theoretical results.

Another measure made it possible to evaluate the impact of the vibrations generated on board the aircraft: based on our data obtained from accelerometer analysis, the Doppler modulation that is generated on the transmitted signal is accepted by the demodulator without appreciable degradation of the performance. The equalizer present in the demodulators currently in use proved to be very effective in the presence of fading, unlike the “classic” DVB-S devices, without equalization, which lost the signal with a few dB fading even in the absence of noise.

In a further laboratory session the actual gains of the satellite dish receiving antennas were detected, finding significant deviations from what was expected, probably due to the wear of the surface of the antennas. Finally, the optimization of the external unit (replacement of the LNA with a state of the art) has allowed to significantly improve the noise figure of the receiver.

From the calculations of Link Budget, confirmed by the tests on the equipment after having solved the initial problems encountered, it is clear that under free conditions, with the current omnidirectional antennas and with the transmission parameters used up to now, the aircraft has an operating limit with sufficient margin, well over 100 km as the crow flies from the receiving system. The geometric calculations also show that particular attention must be paid to the use of the system according to the positioning of the antennas and the turns.
In particular, with the system used by Rai up to now for coverage over distances of more than 100 km, it is necessary, where feasible, to limit the turning angles or alternatively use the antenna positioned under the aircraft and the antenna on the wing. Based on the tests carried out on the available channel modulation / coding configurations that allow to obtain the required capacity, it has been possible to identify sets of modulation parameters that best adapt to the operational needs. It is therefore possible to extend the operating distance of the aerial means, or increase the total capacity of the transmitted signals. 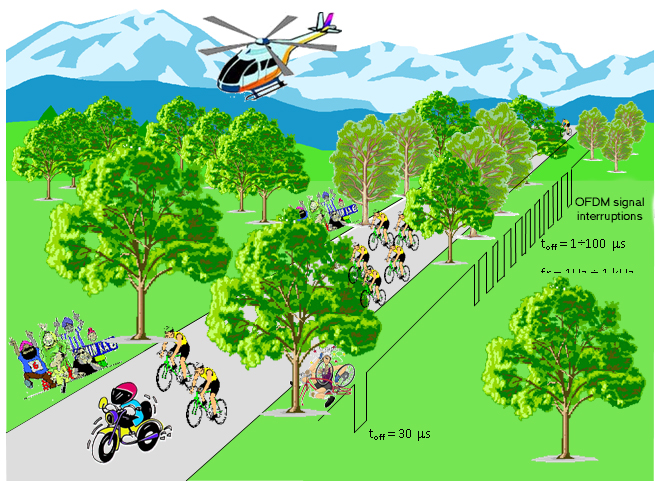