Checking the quality of the transmitted signal has always been an important activity for Rai/RaiWay. Traditionally, such controls have been implemented by measuring signal on the territory by vehicles equipped with antennas mounted on telescopic mast and professional receivers. With the transition  to digital TV, the problem has become even more complex, since, with the single frequency networks, SFN, a given geographical area is served by several transmitters simultaneously [1,2,3,4]. The received signal is thus the merge of multiple time-staggered replicas of the transmitted signal. The problem arise of identifying from which transmitter is a specific component of the received signal, in order to control its quality individually.

Raiway has decided to “tag” the signal of each transmitter using the “Cell-id” parameter, intended for the DVB-H service [3], with the transmitter’s site code. This decision, acknowledged by the Ministry of economic development [5] makes it possible, albeit with great effort and skill, and to a limited extent, to identify the single transmitter pointing the directional antenna. Please note that, to date, a professional receiver DVB-T/H was not able to “separate” the Cell-id of the various component signals, but it provides only the one related to the dominant signal. Also, due to the receiver’s synchronization circuit limitations, the relative time-offsets are not always estimated in stabe and uniqueway , and this makes the manual procedure a difficult and tedious one. It should also be noted that, despite being a problem common to all broadcasters that use the DVB-T system, in Italy the difficulty of controlling SFN signal quality is exacerbated by the fact that the SFN networks have nation-wide extension, and the density of transmitters in certain areas can be very high. 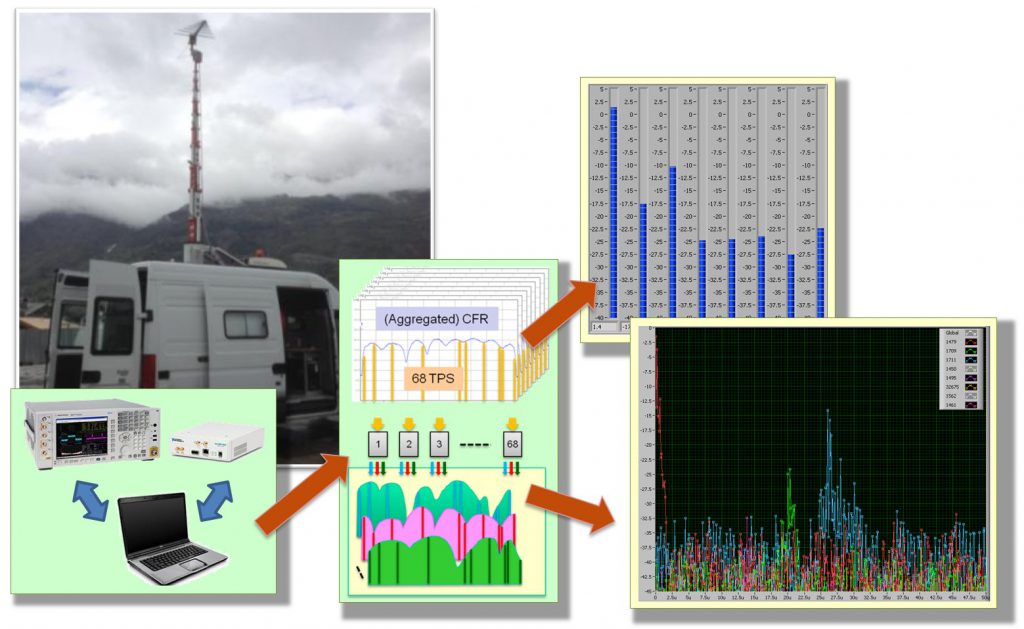 Designed and patented by Rai-CRIT, SFN-Scope algorithm [6, 7, 8, 9] allows to analyse SFN DVB-T signal received in the service area, and identify the individual components of the signals emitted from transmitters covering the area, with their levels and delays. SFN-Scope thus makes it possible to simplify the signal quality control operated by RaiWay teams, and get actual feedback about signals level/delay that until now were only available in a “aggregate” form with ordinary tools.

The algorithm, operating on the portion of the signal that contains the Cell-Id sent by individual transmitters, can extract up to 16 different identification data, using a technique similar to that of a MISO receiver. In this way the 16 level measurements associated with their 16 transmitters are obtained. Also, by means of a special compressive sensing algorithm, signals are further processed to extract the 16 individual channel impulse responses (CIR). The latter allow the operator to visualize the differential delays for every single transmitter and its echoes.

At the CRIT laboratories two prototype versions of the SFN-Scope have been made. An early, “high-end” version uses a Vector Signal Analyzer, the Agilent/Keysight MXA as an RF front-end. This instrument performs the functions of a professional tuner and  OFDM demodulator and provides the signal’s baseband complex vectors and the global (aggregate) impulse response (CIR). The vectors are then captured and processed by the SFN-Scope algorithm on a personal computer. Here the operator can select from a database of transmitters, provided by RaiWay, and  populate the search array: SFN-Scope calculates individual impulse responses of the individual transmitters, and its levels are shown graphically.

A second, cheaper, version of SFN-Scope demonstrator has been developed, based on the USRP (Universal Software Radio Peripheral) marketed for Software Defined Radio applications by National Instruments. OFDM demodulation in this case runs totally on the PC, along with the SFN-Scope algorithm that maintains all the features of the high-end version.

The system was first validated in the laboratory with synthetic SFN signals and with combined DVB-T modulators;  it was possible to evaluate performance and limits of the SFN-Scope as a measuring system. In particular, delays (pre- and post-echoes), levels, frequency offset, and of course the Cell-id could be changed in order to explore various SFN reception configurations. Tests have shown that the system is able to correctly and effectively estimate the individual impulse responses of the all SFN transmitters that participate in the array, provided that they are received at a level above the detection threshold (about-45dB than the main signal). The system is effective with delays up to twice the guard interval. Such result is of great interest to signal quality control applications in area.

Tests with the actual on-air received signal have been carried out in south Turin (Rai-CRIT premises) and Monza (RaiWay Control Center) which confirmed the lab results. In the case of Turin, seven out of the eight receivable transmitters were successfully extracted and identified; the eighth transmitter had a level below the threshold of detection. In the case of Monza, three out of the four transmitters in service have been successfully extracted and identified; the fourth was under the threshold.

SFN-Scope, created and developed in Rai-CRIT, have shown to be effective for advanced analysis of the SFN DVB-T signal. The developed prototype made it possible to evaluate performance and limitations, and constitutes a reference design for possible implementations within existing measuring and monitoring instruments. SFN-Scope constitutes part of the Italian (Rai-RaiWay) contribution at the ITU-R [10]. 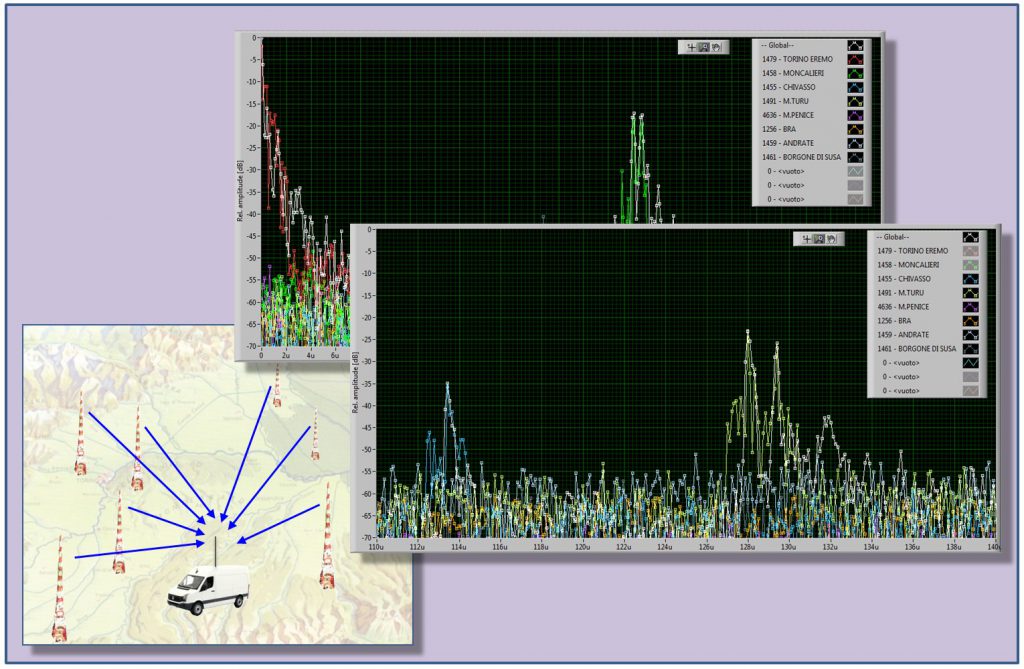 This activity was carried out as part of a collaboration between Rai-CRIT and  RaiWay, and is parto of the Italian contribution at the ITU-R [10].