Rai is planning to extend DAB+ services to the most important Italian urban areas and to the motorways (including service continuity in tunnels). Radio service transmission inside tunnels requires methods such as the installation of radiating cables (“leaky-feeders”) along the tunnel ceiling. This approach is costly, thus leading RAI Research Center to investigate the feasibility of an alternative approach using direct RF irradiation by means of antennas positioned outside the tunnels (not far from the entrance) or internally. 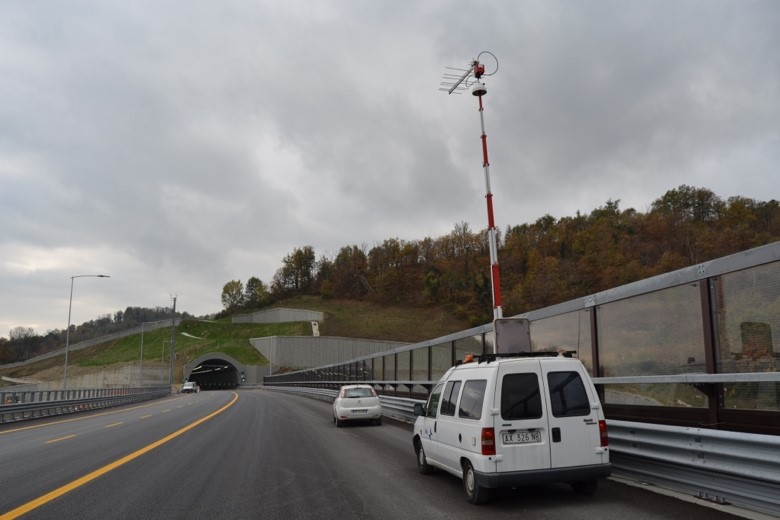 The RAI is planning to extend DAB+ services to the most important Italian urban areas and to the motorways, (including service continuity in tunnels). In a first phase, the motorway coverage should involve the so-called “T-motorway” (i.e. the A4 in the East-West direction from Trieste to Turin and the A1 in the North-South direction from Milan to Naples).
In this context, service coverage for mobile and fixed receivers could be provided by a high-power-high-tower (HPHT) transmitting network with the integration, on motorways, of low-power-low-tower (LPLT) installations in critical mountainous areas (i.e. the Apennine valleys) and tunnels, where the HPHT signal cannot be received.
In November 2015, preliminary tests on the A5 motorway (between Turin and Aosta) confirmed the difficulty of achieving DAB+ service continuity in tunnels from HPHT installations located nearby (Col Courtil and Saint Vincent). As is well documented, radio service transmission inside tunnels requires methods such as the installation of radiating cables (“leaky-feeders”) along the tunnel ceiling. This approach is costly, both in the case where a new radiating cable has to be installed and in the case of sharing cables already in use for other radio services (e.g. FM radio, mobile telephony, radio alerts, police, …).
For decades the RAI has, in cooperation with the main Italian motorway licensees (ASPI, ADF, AdP), provided a special radio programme for motorways called “Isoradio”, based on a single FM frequency (103.3 MHz). So far, “Isoradio” service transmission in tunnels has been achieved by means of radiating cables inside tunnels. The radiating cable approach ensures good FM service continuity in the frequency bands around 100 MHz, even in heavy traffic conditions and, by means of high power multiband combiners, it typically allows carriage of,  other RF services (Police, Firefighters, …).
Due to the cable loss and attenuation, intermediate amplification for trunks longer than 1000 m is necessary; therefore, while tunnels up to 2 km could be fed by external amplification systems, very long tunnels will require several cable trunks and internal signal repeaters.
As an alternative to installing a new dedicated cable, DAB+ can be added on a radiating cable that is already carrying other RF services, but expensive RF branching modifications using multiband combiners are required.

To reduce implementation costs and system complexity, the RAI investigated the performance of “direct RF radiation” of DAB+, by means of antennas placed inside the tunnels or just outside the tunnel entrance (at a maximum distance of 300 m).

To address the lack of published information of propagation data (measurements or models) in tunnels for DAB+ in the 200 MHz band, a measurement campaign was carried out by the RAI in cooperation with ASPI (Autostrade per l’Italia) in the Apennine section of the A1 motorway between Bologna and Florence.

A new measurement campaign in cooperation with Autostrade per l’Italia is under construction, in order to provide a statisctic analysis of the impact of deep traffic over a direct antenna signal transmission in tunnels.