In the next years, due to the growing increase of broadband services and the resulting demand for more spectral resources, the use of the so-called “white spaces” of the television band (TV White Spaces) plays a significant role. The role of a White Space device (WSD) is to identify these free spectrum portions (locally and / or temporarily unused by users assignees for those frequencies) and use them for secondary applications that require lower powers. However, the activation of WSDs in the UHF band, traditionally used for broadcasting, could expose existing television services to the risk of interference. In this regard, a simulative analysis has been carried out by Rai-CRIT to evaluate possible interference scenarios between various types of WSDs and different DTT reception modes in order to estimate the protection distance to reduce the probability of interference on TV reception to an acceptable value according to ITU-R. 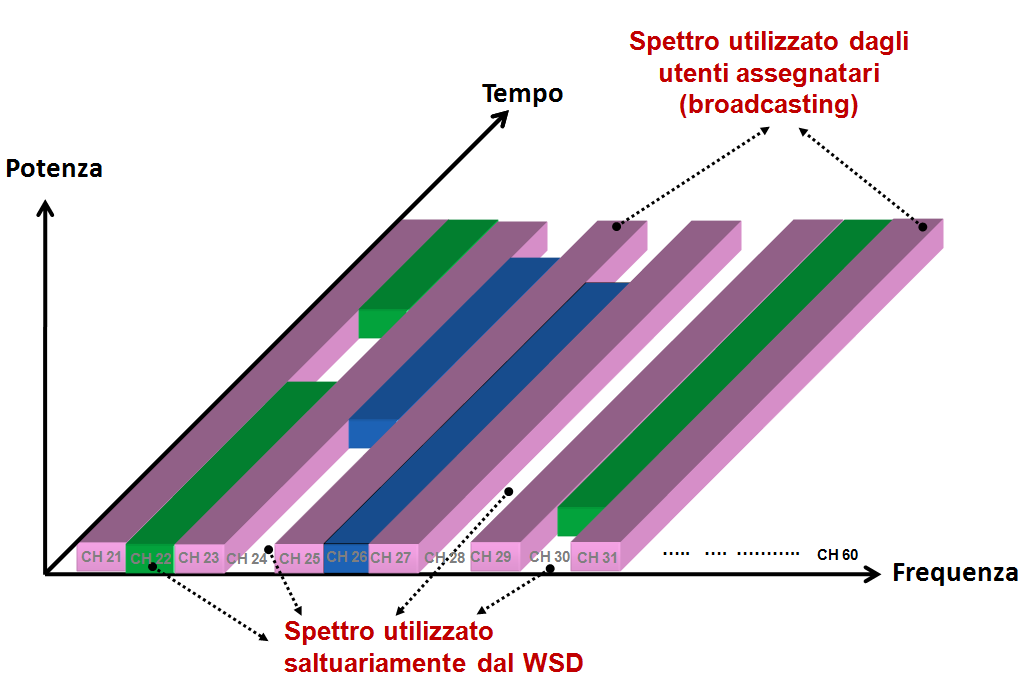 Following on the growth of mobile data traffic by emerging communication systems, the availability of “free” frequencies in the radio spectrum becomes increasingly important. However, the frequency bands potentially usable by these systems are now allocated to different types of technologies (broadband or broadcast). On the other hand, the current spectrum allocation scheme (static type) may leave a significant amount of unused spectrum in some areas: the adoption of a dynamic access method would allow the “secondary” user to access the spectrum temporarily and locally not occupied by the primary user (so-called “licensed” or assigner of those frequencies) without compromising its quality of service (QoS).

In this respect, the so-called TV White Space (TVWS) will play a crucial role. They represent portions of the  spectrum locally and /or temporarily unused by licensed users.

A White Space Device (WSD) can use these frequencies as long as the risk of interference with the primary spectrum users can be appropriately controlled and managed. The bandwidth identified for White Space applications falls into what is currently occupied by terrestrial broadcasting and so-called Programming and Special Events (PMSE) devices, namely wireless microphones, earphones and, in general, a wide range of wireless audio devices.

The interest in the UHF band is justified by its remarkable propagation characteristics, which guarantee the best compromise between the size of the receiver antennas and the size of service areas.

The primary function on which WSD concept is based is to identify these free spectrum portions in order to use them for secondary applications that require lower powers.

It can therefore be assumed that the White Spaces of the television spectrum can constitute a valuable resource for the provision of “broadband” services in rural areas where generally not the all channels are occupied by television broadcasting. In fact, the magnitude of the coverage areas obtainable using UHF bandwidths allows us to realize large portions of the access network, provided that the areas served are not high-density built.

The activation of WSDs in the UHF band, traditionally used for broadcasting, could still expose existing television services to the risk of interference [1-3].

To ensure that secondary spectrum access by TVWS-type services does not cause interference to the broadcast service, it is required that the TVWS devices jointly adopt a series of operational measures, such as:
• Limitation of the maximum output power;
• Preliminary access to a geolocation database, centrally managed, which, based on the position of the device, the local use of the spectrum and the interference tolerance of the redundant devices, provides the device with the power and frequency values that can be used;
• Use of spectrum sensing techniques (ie spectral detection algorithms), so as not to use portions of the spectrum already occupied by primary services (broadcast).

Various scenarios were examined, in the presence of co-channel interference, by adjacent channel and due to intermodulation in the broadband amplifier of the receiving system, including various types of WSD (fixed, mobile and portable) and various DTT reception modes (fixed and portable/mobile) with the aim of estimating the security distance to reduce the probability of interference on TV reception.

Simulation results highlight the criticality of some scenarios, especially those related to adjacent channel interference and intermodulation, which may not guarantee the minimum separation distance required: in the case of a fixed White Space device this could be solved by a careful installation procedure (i.e, avoiding the installation of the White Space device in the main lobe of DTT antenna) though if this solution may not be sufficient for user antennas installed after the White Space device. In addition, the presence of a White Space mobile device (hardly controllable by a geolocation database) very close to a DTT receiver antenna could result in additional risks of interference with TV reception.

Part of these results have been included in the DVB TM-CSU report [4]. 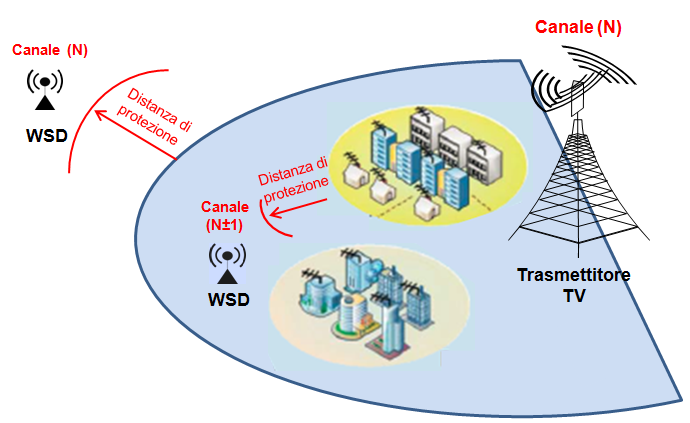 Following the recent introduction of LTE mobile service in a portion of the UHF band (800 MHz band) that traditionally was intended for the exclusive use of TV broadcasting, serious problems on the continuity of the television reception may arise. In particular, a weak point is the antenna amplifier. In order to analyze (and then simulate) the behavior of this device in case of non-linear distortion due to the presence of strong LTE signals, we carried out specific laboratory tests to characterize some typical antenna.