To perform simulations of the geographical coverage of the television service with transmitters HTHP (High Tower, High Power) to portable terminals (phones) it is necessary to know the radio features of a typical receiver antenna. However, mobile phones are consumer items and in the documentation are not usually included technical features with this level of detail. In the absence of official features, it became necessary to proceed to direct measurement of the antenna performance for a typical 800 MHz-band LTE mobile phone terminal. 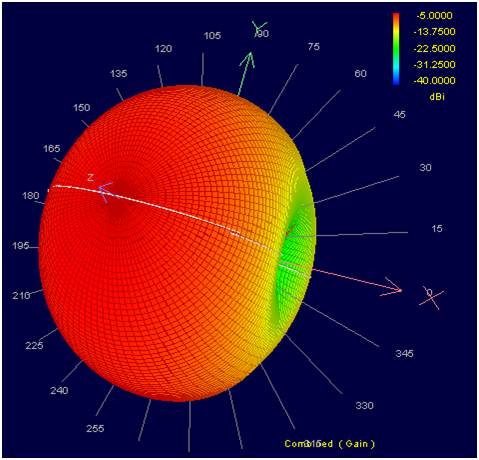 The measurements of the radiation characteristics of the antennas are traditionally performed in anechoic chamber (issues: extremely high cost, complicated procedure, long and tedious process to get the full antenna diagram), or in open fields (problems almost similar to the previous case), or, in the case of small antennas, through special scanners in mini anechoic chamber (short measurement times, simple calibration, costs still high).

We used an alternative technique recently available: a very near field scanner (EMscan RFX2) which allows to obtain the complete antenna pattern in seconds and the near field maps with simple calibration, good repeatability, and without requiring an anechoic environment [1,2]. The scanner consists of a flat surface containing 1200 magnetic field probes; a RF switching matrix and a vector analyzer. The close field is captured, subjected to calibration, and the antenna diagram is then calculated using near-field/far-field transformation. To obtain energy performance, the return loss is preliminarily measured with a Network Analyzer. It is possible to capture the near field at different frequencies and get then gain, directivity diagrams, etc. as a function of frequency.

The LTE device under test was measured at different frequencies in the 800 MHz band. Antenna diagrams (far field) for both polarizations were acquired and we could therefore made an analysis in postprocessing, dissecting the radiation solid and performing statistical evaluations. In particular, we calculated the complementary cumulative distribution of antenna gain obtainable at various directions of the section.

The use of LTE Terminal antenna for television reception involves a use different from that of a classic cell phone: in fact to display video images the Terminal is used horizontally, so the antenna is rotated 90° from the typical use. This has been taken into account in the analysis of data and in the choice of radiation solid sections.

Thanks to the simplicity of the technique it was possible to repeat the measurements with the operator’s hand holding the Terminal, getting realistic results of influence of the hand on the performance of the antenna. The same statistical analyses were then repeated for such a  configuration.

Further details are included in the Technical Report [3].

The growing demand for transmission capacity for mobile access has led in recent years public administrations to consider new ways of spectrum management, which include sharing between different services and operators. At the invitation of the Italian Ministry of Economic Development we have participated and contributed to a field experiment aimed at assessing the problems of interference eventually suffered by PMSE services (wireless cameras for TV production) by LTE services in the 2.3-2.4 GHz band.

Rai CRIT, in cooperation with RaiWay, launched in 2015 an experimental trial in Aosta Valley where two data streams share the same UHF channel in time-division: one conveys conventional HDTV programs targeting domestic DVB-T2 receiver, and a second one conveys a flow intended for 4G LTE-A+ devices such as smart-phones and tablets.

This brief note describes the context in which we operated, introduces the concept of Tower Overlay over LTE-A + (TOoL +) and shows the results of the trial carried out in the Aosta Valley.