In the generic field of media and in radio-television services, the  quality control on a technical point of view, often referred to as the English acronym QC, can embrace every aspect of the production chain, from shooting/recording or purchase to editing/adaptation through to public communication to the audience “on line” or via traditional broadcasting.
The management of audio-visual material today implies that it is saved in the form of digital files, according to the appropriate standard formats. This allows for copies, transfers and elaborations with computer tools, even with automated processes.
Despite numerous and obvious advantages, audiovisual files may be insidious because of the many incompatible variants and give rise to a number of peculiar issues. Despite the standardization of formats, most available systems are only able to operate correctly with some specific configuration.
In addition to this, there is the risk of file corruption, copying problems or storage services, taht, if not detected on time, may cause service delays or interruptions, annoying content defects such as frozen and/or blockiness and annoying and unintelligible audio, to the extreme case of loss of content.
A separate mention deserves QC in the context of digitization and archiving, in which it is to be certified that the digital master file obtained by the digitization of the analog media (video cassettes and films) has a conforming content and quality not inferior to the original. In this case, a non-optimal quality may be attributable to the condition of the old media, but it is necessary to distinguish when it is possible to obtain an improvement for example  repeating the digitization in different ways. 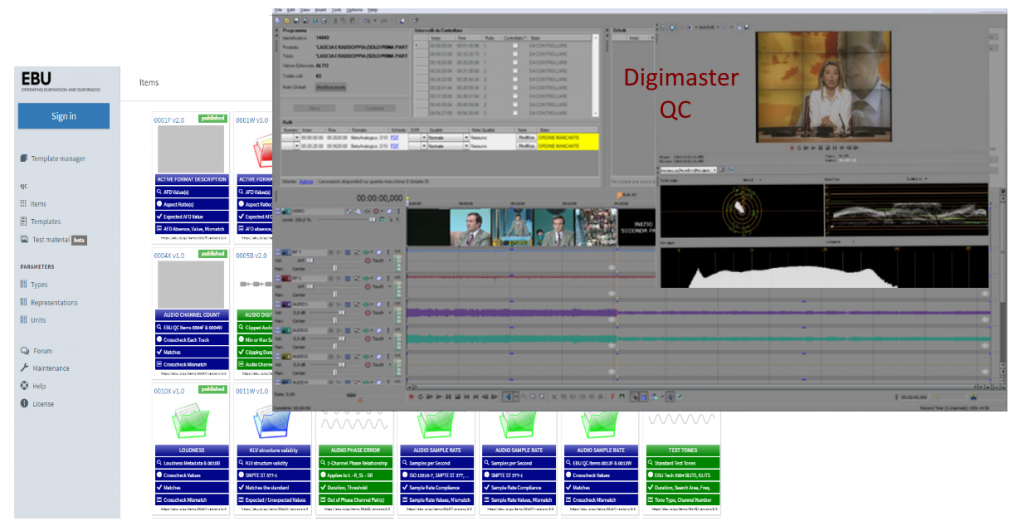 QC issues are obviously common to all broadcasters and companies working with audiovisual media and there are technical collaborations to approach shared solutions.
In this regard, the European Broadcasting Union (EBU/UER) with the public televisions of the old continent, has promoted since 2011 a working group focused on QC for digital files, with attention also to interoperability problems between the latest generation devices and file formats compatibility.
The activity has led to the identification of all the possible controls that the broadcasters and audiovisual material producers are interested in, in order to overcome problems in the retention, processing and post-production of the files in their possession.
Controls range across layers including the bandwidth (audio and video as they appear and sound), audio and video encodings (eg MPEG2, AVC, AAC), structural and metadata correctness of technical metadata (such as Resolution and aspect ratio of the video) and editorial metadata (such as subtitles).
RAI Center for Research and Innovation Technology (CRIT) has contributed to the definition of the data model for the description of tests and provided requirements for specific tests, as well as sample audiovisual files.
For each of these tests, in addition to a summary description and a list of related resources such as standards, technical recommendations and sample audiovisual files, details of the inputs and outputs that are expected from such control are provided. Each test takes the form of a card, published on the EBU site https://ebu.io/qc/items/, useful for anyone who wants to investigate the tests already coded (and possibly propose others) and especially for those who realize QC software to determine how to structure their business products.
Many of the controls can be automated reliably, such as formal control of wrappers and encodings, while others such as the search for artifacts due to analog digitization are only partially automated and others are for now exclusively manual and must be entrusted to experienced technicians.
Audiovisual content is also matter of typical media business transactions, so programs and/or contributions can be commissioned or purchased from different companies.
In these cases, after the delivery of the material, a technical testing activity is carried out in order to verify its compliance with the contractual requirements.
RAI has decided to publish technical specifications on the features of the audiovisual files provided by other companies. CRIT has contributed, together with other Rai departments, to the drafting of this specification, now available at http://www.qualitaepianificazione.rai.it. The specification refers to the purchase of SD/HD/3D/UHD files and it defines the accepted formats and profiles, delivery modalities, and minimum accepted quality of the content.