Since 1993 with DVB-S [1-4], CRIT has led the DVB developments for the introduction of digital TV and multimedia services by satellite, and his leadership continued in 2003 with DVB-S2 [5-7], and 2013 with DVB-S2X [8-10]. Such satellite standards have been  the benchmark for technical excellence in broadcasting worldwide, and similar technologies and architectures have been re-used  for designing the DVB terrestrial and cable applications. 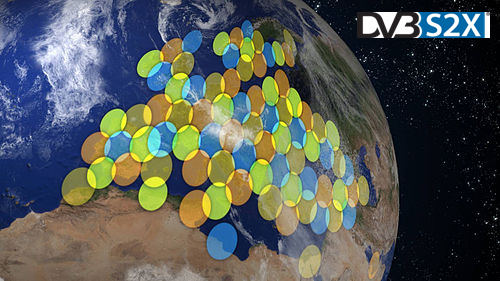 In 2013, ten years after the development of S2, the DVB Project started the definition of S2X, an extension of DVB-S2 to cover traditional DVB-S2 use cases that include digital video broadcasting, interactive broadband applications (forward link), Digital Satellite News Gathering and other professional links such as internet trunking with enhanced features and performance. It also encompasses new use cases operating at very low signal to noise ratio (SNR), such as mobile services for business jets, fast-trains, and boats, etc., and low-aperture terminals for journalists, VSAT.

For a future proof system definition, an optional super-framing structure has also been introduced in DVB-S2X , offering the following benefits:

The Superframe may thus become the tool to support the evolution of the satellite technology (High Throughput Satellites and large scale Low Earth Orbit constellations) at the horizon.

A new method to generate and transmit alarm signals to alert the population in the event of natural disasters, embedded in satellite TV transmissions has been devised by Rai-CRITS and proposed to DVB. The prototype developed in the project allowed us to test in the laboratory the effectiveness of the method and the backward compatibility with existing DVB-S/S2 receivers.

Born as an extension of second generation satellite broadcast standard DVB-S2, the DVB-S2X offers new configurations that provide improved performance in S2 scenarios (DTH, broadband and interactivity, DSNG, and professional applications, contribution and distribution TV), and extends the operating modes to cover new emerging segments such as mobile reception (airplanes, trains, ships, etc.). The new system, based on the excellent technologies of DVB-S2, introduces innovative elements at the modulation, resulting in a more extensive and granular operating range in terms of  signal-to-noise ratio, as well as an increased spectral efficiency thanks to new modulation schemes and spectrum roll-off values. With the DVB-S2X the “channel bonding” is now introduced: 2 or 3 transponder can be used simultaneously, in order to transmit very high capacity streams, enabling the broadcast of UHD bouquets.

The first satellite transmission of a HEVC encoded UHD-4k bouquet, using the new broadcasting standard DVB-S2X, has been carried out on 2014 at the Centre for Research and Technological Innovation Rai in Turin.