Despite continuous progress in early detection of imminent natural disasters, the lead-time may still be a critical aspect. It is of utmost importance that the widest possible audience can be informed about steps they can take to protect themselves. Broadcast TV channels offer the best suited method to reach nearly 100% population in any disaster scenario [1,2], providing the local authorities with a technology to arrange for an alert scheme where the audio message is accompanied by a visual message inserted into the video stream during the announcement. EWS should triggers the receiver, even when in stand-by mode, to have a certain behavior to alert its owner (e.g. turning on and displaying a message with an audio alert etc.[3])

This approach, that looks very simple at first reading, raises however some specific challenges. First of all, the power consumption of the TV device in standby mode must be in compliance with the standby regulation about maximal power consumption, that is  0.5-1W in this mode. Moreover, in order to identify a specific flag in the received signal, a TV or STB device needs to have its tuner and demodulator powered, as well as potentially also some external antenna amplifiers. For the satellite case, this would include the powering of the LNB, and, in case, line amplifiers. Yet another challenge is to devise a method to convey a (limited) set of alarm signals to the users’ radio/TV receivers, without requiring to replace existing devices with new ones. 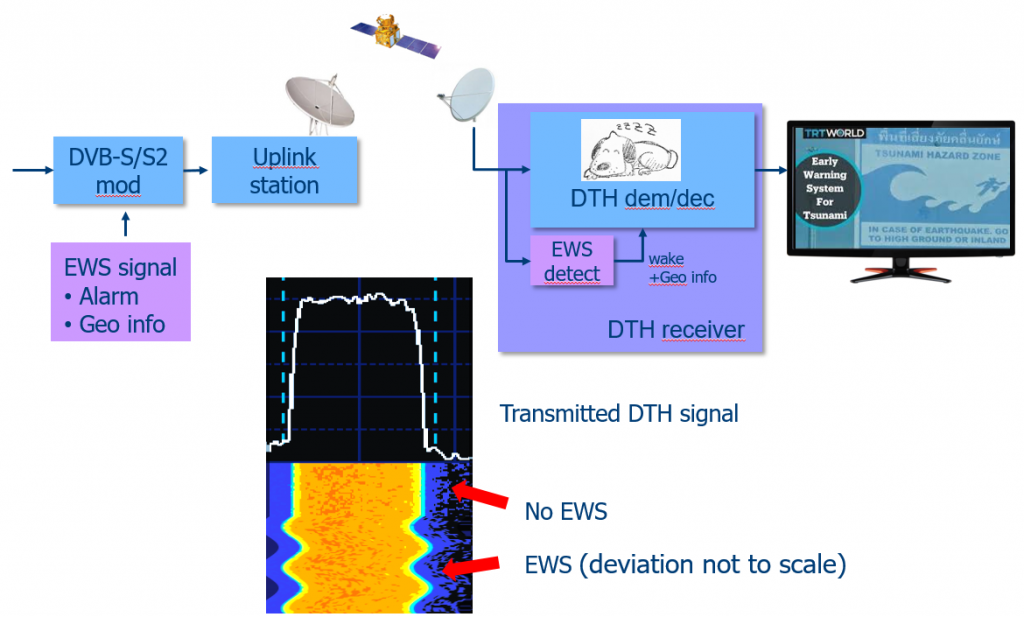 The problem of limiting the standby consumption of the receiver, however monitoring the signal, was easily solved by implementing an operating scheme in which the screen and most of the circuitry of the TV receiver remain off, while only the receiver section (LNB, tuner / demodulator ) is periodically turned on for a short time, sufficient to verify the alarm signal, and turned off for a time long enough to keep the average power in compliance with the standards, guaranteeing anyway a fast response to the presence of the alarm. This parameter can be set according to the needs of the local authorities. The question of whether, and to what extent, a typical LNB is tolerant in a high number of on and off, has been addressed in a separate laboratory investigation, carrying out an adequate “stress test” to a number of devices.

The problem of conveying new signals through DVB-S/S2/S2X modulation without having to replace the receivers has been solved by means of an innovative method, subject to Rai-CRITS patent. Before being transmitted, the DVB-S/S2/S2X signal generated by the earth station is applied a further, low index, frequency modulation, the modulating signal of which contains the alarm information according to a predetermined geographical coding. The typical user receiver interprets the tiny frequency perturbation introduced on the signal carrier by the EWS signal as if it were a small frequency fluctuation of the LNB, and, as such, cancels it. By analyzing the frequency offset signal on the carrier recovery circuit of the demodulator, it is possible to extract the EWS baseband signal, and, with further processing, decode the alarm information, when present. The detection of the latter is used by a control circuit that turns on the rest of the TV receiver and the display, and, after appropriate security checks at the protocol level [4], starts broadcasting the messages and alarm images for the users. Since all the necessary circuits are already present in existing TVs and STBs, this type of extraction of the EWS signal could be easily implemented as a firmware update by the respective manufacturers. This constitutes a huge advantage, as the proposed EWS system is thus backwards compatible with the existing TV receivers. Also on the transmission side, the injection of the EWS modulation is likely to be implementable in current modulators with existing hardware through a firmware upgrade.

A demonstrator of the proposed EWS system has been developed in the Rai-CRITS laboratories. The satellite TV signal was generated with conventional equipment, and EWS modulation was therefore introduced. The signal thus obtained was correctly received by normal commercial receivers (TV and decoders). For the detection of the alarm signal, since it was not possible, without the help of the manufacturers, to intervene inside the commercial receivers, a DVB-S/S2 FPGA receiver was developed, from which it was possible to extract the required frequency offset information. Alarm signals containing selective geographic information were successfully detected by the prototype.

Laboratory tests carried out in parallel on some commercial receivers made it possible to verify the validity of the method in terms of compatibility with existing receivers, low probability of false-alarm and missing-detection.

The EWS satellite transmission system proposed by Rai-CRITS, and laboratory tests on the behavior of the LNBs constituted the Italian contribution to the DVB working group on the Early Warning System.

Born as an extension of second generation satellite broadcast standard DVB-S2, the DVB-S2X offers new configurations that provide improved performance in S2 scenarios (DTH, broadband and interactivity, DSNG, and professional applications, contribution and distribution TV), and extends the operating modes to cover new emerging segments such as mobile reception (airplanes, trains, ships, etc.). The new system, based on the excellent technologies of DVB-S2, introduces innovative elements at the modulation, resulting in a more extensive and granular operating range in terms of  signal-to-noise ratio, as well as an increased spectral efficiency thanks to new modulation schemes and spectrum roll-off values. With the DVB-S2X the “channel bonding” is now introduced: 2 or 3 transponder can be used simultaneously, in order to transmit very high capacity streams, enabling the broadcast of UHD bouquets.

The first satellite transmission of a HEVC encoded UHD-4k bouquet, using the new broadcasting standard DVB-S2X, has been carried out on 2014 at the Centre for Research and Technological Innovation Rai in Turin.