In today’s digital age, the ability to access, analyse and (re) use large amounts of data is a strategic asset of fundamental importance for the broadcast and media industry. The challenge lies in the ability to search, organise and access multimedia assets in a fast and semantically relevant way. Visual search technology is the new frontier for achieving these objectives. In fact, it allows users to search and match image and video contents depicting the same objects, such as buildings, paintings and logos, based on visual similarities and without the need of querying for manually generated metadata. 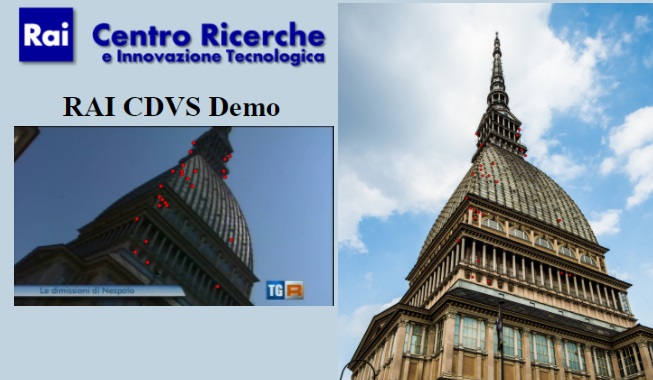 Visual Analysis relies on the idea of indexing and matching image and video contents based on visual characteristics, in addition to manually generated metadata. Many methods have been developed to achieve this goal, such as those for key-point feature detectors and descriptors. The Moving Picture Experts Group (MPEG) started in 2010 a standardisation initiative called Compact Descriptors for Visual Search (CDVS) that provides a robust and interoperable technology to create efficient visual search applications in image databases. Recently the interest is moving forward to the video domain with a new activity called Compact Descriptors for Video Analysis (CDVA). Intuitively, video analysis is a more challenging problem than still images due to temporal and spatial redundancy in video, which increases the amount of data that needs to be processed.

Based on visual search technology, several use cases can be defined. Among them, the following ones can be cited:

A first prototype of the system was implemented and tested. We collected a dataset of more than 20 hours of video material showing monuments, paintings, sculptures and historic locations of the Italian artistic and cultural heritage. Achieved accuracy demonstrated the system’s reliability and validity. This allows several practical applications, such as e.g. detection of points-of-interest (e.g., historical bridges, buildings, monuments) for intelligent shot framing and/or for opportunistic shooting.