The growing demand for broadband services has led the World Radiocommunication Conference (WRC-07 and WRC-15) to allocate in ITU region 1, including Europe, a portion of the spectrum in the UHF band between 790 and 862 MHz and later between 694 and 790 MHz, on a co-primary basis for broadcasting and mobile services. In particular, the European Union has decided to harmonize this “800 MHz band” (the so-called Digital Dividend) for LTE services from January 2013. These frequencies were also assigned in Italy by public invitation to the three mobile telephony operators Wind, Tim and Vodafone. However, coexistence in adjacent frequency bands of broadcast and cellular services within the UHF band traditionally used for TV distribution may in some cases cause problems with the reception of television signals. In particular, in the case of wide band TV reception systems, widespread in Italy, the high level of input signals could lead to saturation of the amplifier, with generation of intermodulation products and consequent disturbances on all TV channels. 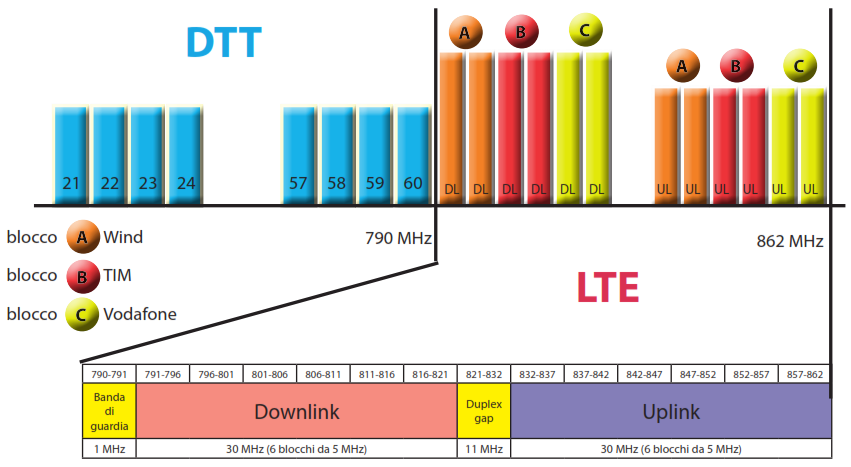 The coexistence of broadcast and cellular services within the UHF band can cause problems with the reception of television signals particularly close to LTE stations. The most critical areas are peripheral zones within the coverage area of DTT transmitters, if a LTE base station operating in the 800 MHz band is installed in proximity. In fact, existing distribution amplifiers for TV receivers have been designed to operate on the entire UHF band, thus receiving the LTE signal emitted by the BS or the user terminals, with power levels that in some situations, may be higher than that of DTT signals. The main phenomena that can occur are:
• interference from adjacent channel, with effects especially on channel 60;
• saturation of the head amplifier, resulting in disturbances on all channels of the UHF band.
The latter phenomenon is the most critical, and occurs in the case of reception by centralized antenna systems or, in any case, on all receiving systems that include broadband amplifiers.
These systems, most commonly used in Italy, are generally used to serve user groups, for example, resident in a condominium, through an appropriate signal distribution network. The head amplifiers are intended to amplify TV signal received through the antenna to a sufficient level so that it can be distributed and properly received by each connected television set, compensating for the attenuation introduced by the distribution network. Since 800 MHz LTE signals are within the design band of the existing amplifiers, they are received and amplified by the head amplifier along with the TV signals: a high level of these LTE signals can therefore overcome the rated output level of the amplifier, causing intermodulation or saturation phenomena. The effects of these disturbances may occur on all television channels, depending on their level, distance from the base station and the amount of data traffic generated by users connected to the LTE cell at that time.

Rai-CRIT has developed a software simulator able to evaluate, starting from the DTT and LTE transmitters data and the characteristics of the typical antenna system adopted by the users in a geographical area, the situations where interference due to intermodulation of the head end amplifier can cause loss of reception; the simulator is able to estimate the reduction of the original reception margin based on the evaluation criteria set out in international law [1,2].
This simulator was used to provide the Technical Commitee set up at the Ministry of Economic Development (MISE) with additional information on field experimentation carried out in the San Benedetto del Tronto area with the participation of a mobile operator, pointing to potentially interfering areas up to a distance of about 1 km from the LTE Base Station [3-6].

The simulation results indicate that the use of a good “LTE filter” is an effective mitigation technique in most cases; however, there is a residual area near the Base Station where the correct reception margin on DTT signals is not restored: additional mitigation techniques are required in these areas. 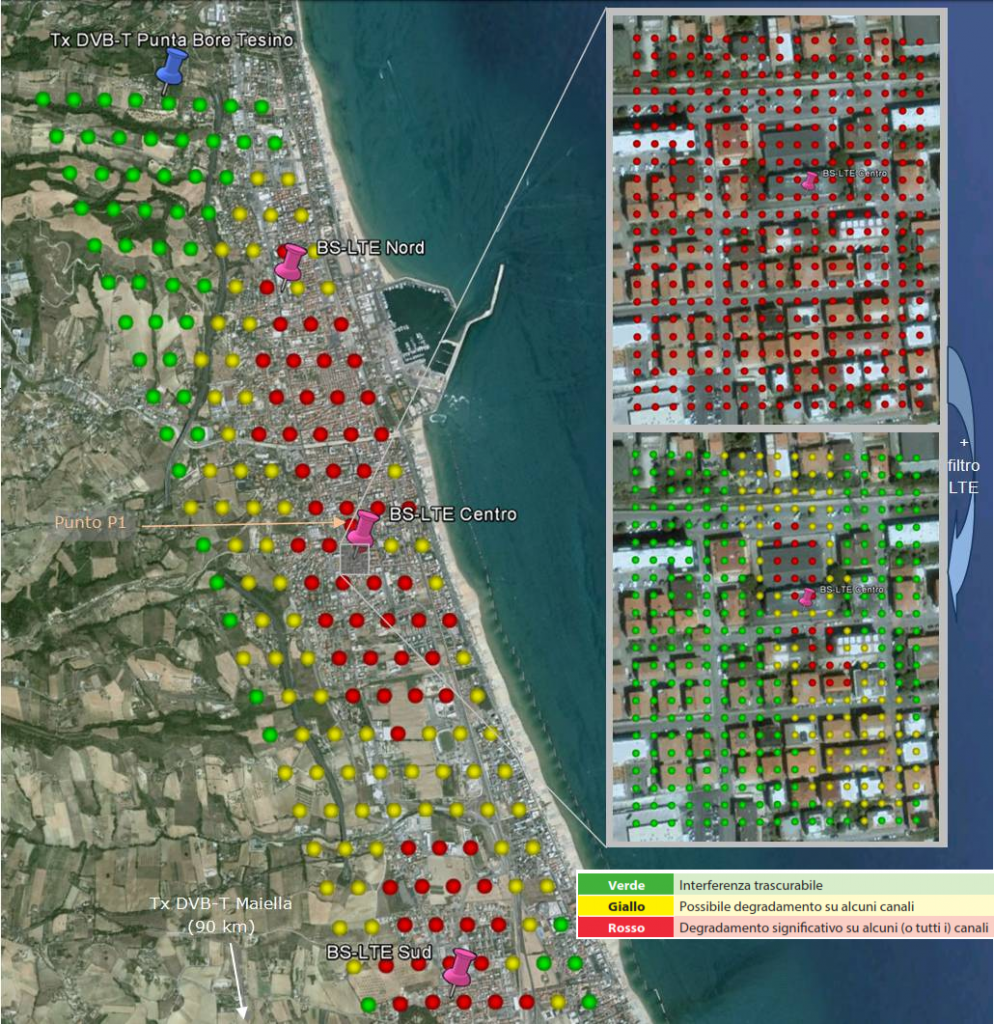 [4] A. De Vita, D. Milanesio, B. Sacco, A. Scotti: Assessment of interference to the DTT service generated by LTE signals on existing head amplifiers of collective distribution systems: a real case study, “IEEE Transactions on Broadcasting”, Vol. 60, No. 2, June 2014, http://ieeexplore.ieee.org/document/6815963/.