The activation of 4G/5G cells operating on the same frequency band traditionally used by TV installations can have, in some areas, an impact on the reception of TV signals. In particular, in case of reception via collective distribution systems there is a risk of intermodulation of the wideband head-end amplifier. The most critical geographical areas are those at the border of DTT transmitters’ coverage and close to a 4G/5G Base Station.

In fact, the interference may lead the performance of the receiving installation close to the reception threshold, without necessarily reaching it: the user might not immediately be aware of the problem, but is anyway at risk of future service interruptions in the presence of daily or seasonal propagation conditions, or during traffic peaks on 4G/5G networks [1,2,3,4]. Despite a gradual roll-out of LTE Base Stations in the 800 MHz band on Italian territory by mobile telecom operators, and a traffic generated by final users still not at full load, in many cases the effects of the interference have been actually observed, with the need of proper countermeasures.

The main recommended technique for 4G/5G interference mitigation is the installation of a filter with sufficient selectivity in front of the receiving installation head-end (or integrated within the amplifier) [5].

Simulations have confirmed that this kind of filter can solve possible reception problems in most cases. However, the most critical situations, close to Base Stations, require the adoption of further mitigation techniques, to be considered case by case: for instance, reduction of the amplifier gain (where possibile), different pointing or location of the receiving antenna, use of channel amplifiers, etc.

With the future activation of 5G mobile telephony services in the 700 MHz band, the technical characteristics of these filters will have to be updated, with a reduction of the passband. The technical parameters of these new filters are under definition. The reference international standard, which will be released soon, will be CENELEC EN 50083-2-4.

Users experiencing TV reception problems, potentially related to interference from mobile telephony services, can report it to the “HELP interferenze” (http://www.helpinterferenze.it) portal, managed by Fondazione Ugo Bordoni (FUB): if the report is judged relevant, an installer will be sent to properly restore the TV reception condition, without costs for the citizen. 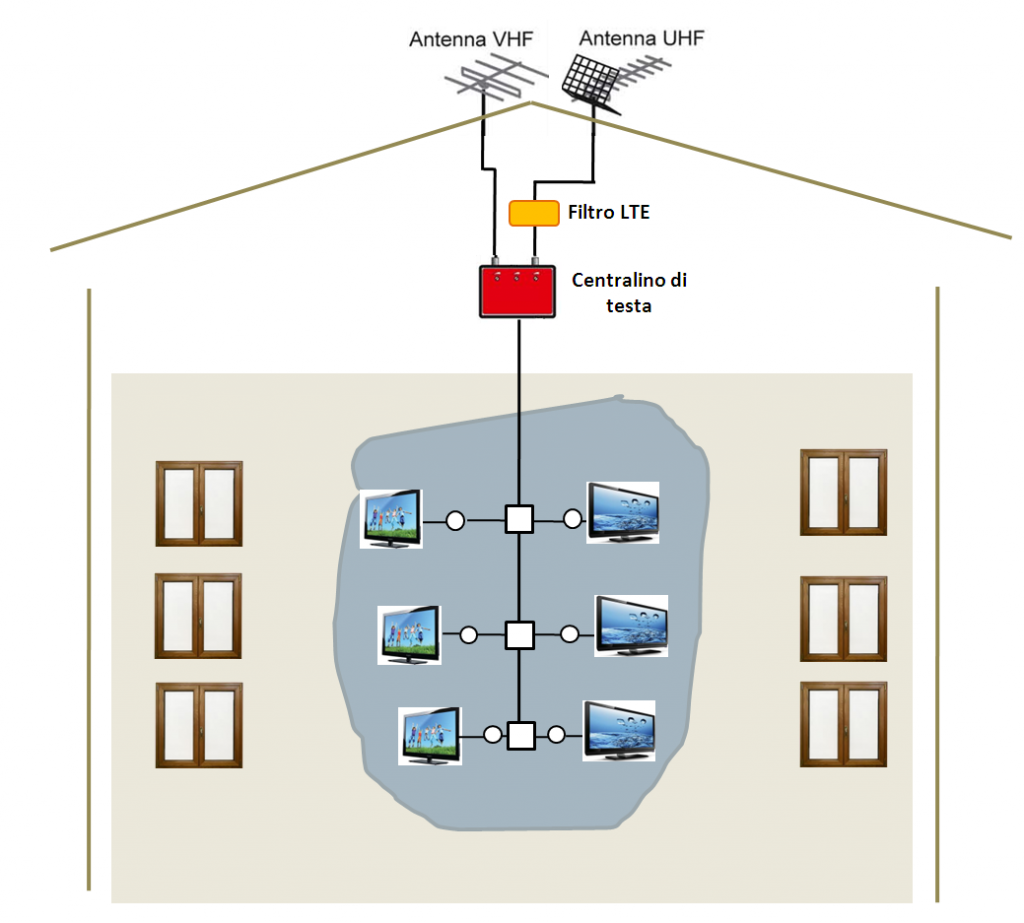 [4] A. De Vita, D. Milanesio, B. Sacco, A. Scotti: Assessment of interference to the DTT service generated by LTE signals on existing head amplifiers of collective distribution systems: a real case study, “IEEE Transactions on Broadcasting”, Vol. 60, No. 2, June 2014, http://ieeexplore.ieee.org/document/6815963/.

The presence of 800 MHz LTE signals within the UHF band traditionally used to distribute television signals may in some cases cause interference problems.

The growing demand for transmission capacity for mobile access has led in recent years public administrations to consider new ways of spectrum management, which include sharing between different services and operators. At the invitation of the Italian Ministry of Economic Development we have participated and contributed to a field experiment aimed at assessing the problems of interference eventually suffered by PMSE services (wireless cameras for TV production) by LTE services in the 2.3-2.4 GHz band.

Experimentation of the coexistence of Radio Link services and LTE in the 3.6-3.7 GHz band

The growing demand for transmission capacity for mobile access has led in recent years public administrations to consider new ways of spectrum management, which include sharing between different services and operators. At the invitation of the Italian Ministry of Economic Development we have participated and contributed to a field experiment aimed at assessing the problems of interference eventually suffered by Fixed Services (Radio Links for TV contribution / distribution) by LTE services in the 3.6-3.7 GHz band.

Following the recent introduction of LTE mobile service in a portion of the UHF band (800 MHz band) that traditionally was intended for the exclusive use of TV broadcasting, serious problems on the continuity of the television reception may arise. In particular, a weak point is the antenna amplifier. In order to analyze (and then simulate) the behavior of this device in case of non-linear distortion due to the presence of strong LTE signals, we carried out specific laboratory tests to characterize some typical antenna.