BRIDGET (BRIDging the Gap for Enhanced broadcasT) is a project co-funded by the European Commission in the context of the VII Framework Program. The project is active between November 2013 and October 2016 and sees the involvement of 9 European partners among which RAI. 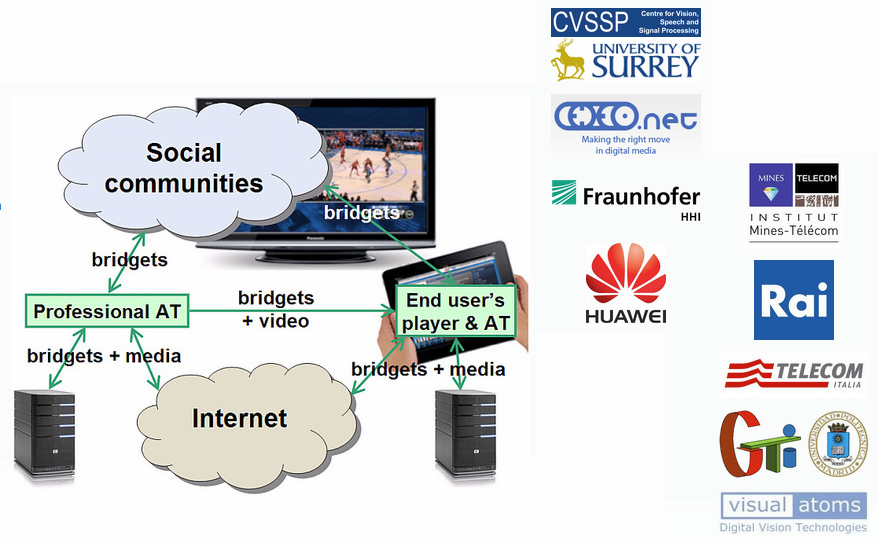 The main objective of the project is to build a system for the efficient exploitation of publication channels that rely on devices to perform the so-called second screen functionality (for example tablets and smartphones) through the integration of analysis and indexing technologies. content and authoring tools dedicated within the production.

A second screen application in the context of media and broadcasting is, in general, an application for mobile devices that enriches and integrates the main experience, namely the use of radio and television programs on broadcast channels such as DTT and satellite, with a related multimedia experience, consisting of the presentation of multimedia content with which users can interact during or after the main use.

The existence of this research project derives from the observation that, although the second screen applications are still fairly widespread, especially in the commercial and advertising fields, a coherent and efficient production process has not yet been established to allow producers and content distributors to make the most of the potential of this business model, pervasively for all kinds of Project BRIDGET New dimensions in the creation and distribution of multimedia content content, controlling the editorial aspects in a complete manner. It is equally clear that for actors, such as RAI, who possess an important archive heritage these technologies and these processes are of strategic interest also for the valorization of this patrimony. The expected impact of the technologies developed by the project is therefore very high.

The concept of bridget
An essential element of the conceptualization that guides the research and experimentation activities of the project is the bridget, that is to say the element that preserves the linking information between a multimedia source (or a part of it) and the enrichment contents. It is through the definition of bridget that the author of the second screen experiences formalizes and controls the flow of ancillary information and their graphic layout. At the end of the editorial work, the accessory information is
then reachable through informative bridges (ibridget precisely) that generalize the concept of hyperlink in the multimedia domain.

Technological approach
In order to demonstrate these concepts, the project chose an approach based on the use of technologies at the forefront of content analysis and indexing, to support specific authoring tools. Among these technologies stands CDVS (Compact Descriptors for Visual Search), an ISO standard that specifies an extraction method and a standard format of compact descriptors for the visual search of contents, ie the retrieval of contents through the specification of queries consisting of visual elements (images or video) of reference.

Together with CDVS, the project will develop tools for the structural analysis of content aimed at providing the author with a starting point for the definition of the parts of the program to which the accessory contents must be associated, for example the automatic detection of relevant parts, such as interviews and dialogues, to which it will be possible to associate in-depth multimedia data, or the tracking (clustering) of the faces of the protagonists of a program.

Protagonists
In addition to RAI, which participates with the Center for Research and Technological Innovation and with the Production Center of Turin, large companies such as Telecom Italia and HUAWEI, small and medium enterprises such as Visual Atoms and CEDEO, take part in the project.
universities and research centers such as Universidad Politecnica de Madrid, University of Surrey (project coordinators), Fraunhofer HHI and Institut Mines Telecom.

The consortium is also committed to producing standard technologies, in order to enable the production of interoperable systems, especially in the MPEG (ISO / IEC JTC 1 SC 29 WG 11). In particular, he recently proposed the definition of a new standard called Media Linking Application Format (MLAF), a data format for the representation of information
connection between generic multimedia elements, essentially the standard version of bridget.