Unlike DVB-T and DVB-S/S2 standards (in the profiles used for distribution to the final users), where all audio/video content and associated information is present in the Transport Stream (TS) which carries them, the distribution of the DVB-T2 multiplexes to the transmitters located throughout the territory requires the transport of a T2-MI (Modulator Interface) stream, where the TSs associated with the various Physical Layer Pipes (PLPs) are not directly accessible and require to be further extracted [1],[2]. Therefore, today the satellite distribution of these streams to the DVB-T2 transmitters requires dedicated transponders, which can not be used for the direct-to-home reception of the same TV programs by standard satellite receivers. This causes duplication of the needed satellite bandwidth, with the associated costs.
Although the use of dedicated transponders for primary TV distribution, typically on satellites in a “less valuable” orbital position, is a widespread practice and currently used also by Rai Way for the primary distribution of Rai DVB-T signals, there may be cases where a resource optimization is desirable.
DVB (Digital Video Broadcasting) has set up a new ad-hoc group, named TM-T-JSI, with Rai-CRIT participation, aiming at developing an optimized way to deliver DVB-T/T2 multiplexes from a national head-end to the terrestrial transmitters, while allowing at the same time direct reception via DVB-S/S2 commercial satellite receivers. 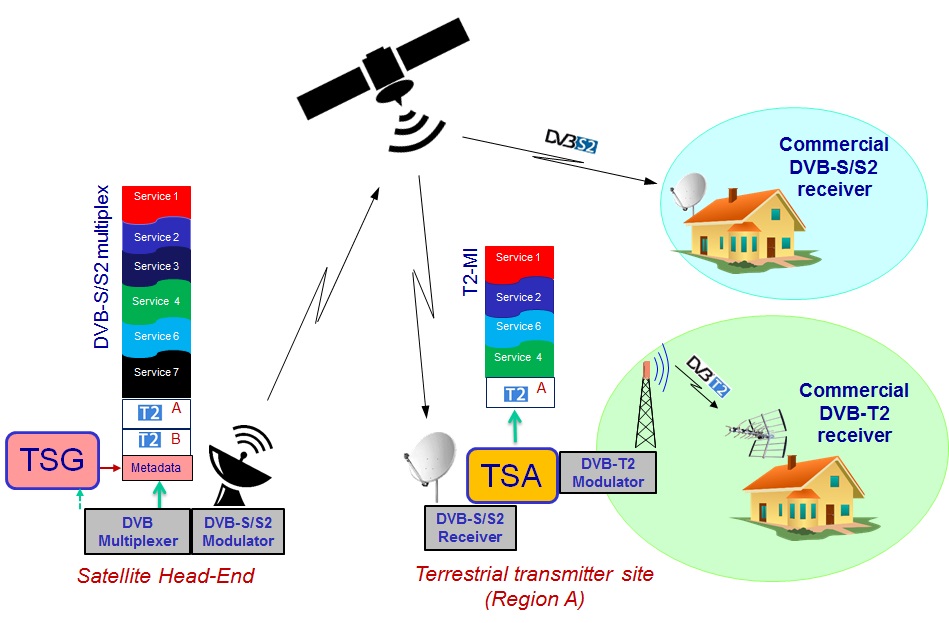 Requirements relevant to signal regeneration at the terrestrial transmitters:

The solution under study

Although the technical solution is still under development within the DVB ad-hoc group, some elements have already been defined.
The system architecture includes a Terrestrial Stream Generator (TSG) located at the satellite head-end and a Terrestrial Stream Adapter (TSA) for each of the terrestrial transmitting sites. The latter has the task of deterministically reconstructing the original T2-MI stream, also guaranteeing the perfect synchronicity with the streams generated by other TSAs operating within the same SFN network.
In order to guide the reconstruction of the terrestrial multiplexes, the TSG inserts proper metadata in the satellite multiplex, carrying information for synchronization, signaling and service filtering.

Special attention will also be paid to minimizing the introduced overhead.

The  Research Center in co-operation with Rai Way has launched in Aosta Valley on UHF channel 53 a second  DVB-T2 transmitter located in Salirod-Saint Vincent that, along with the transmitter Gerdaz-Aosta, installed in 2012, allowed to set up a DVB-T2 a small regional single frequency network test bed. This field trial has allowed us to experience the typical issues associated with a SFN: synchronization of transmitters, assessment of the areas of overlapping coverage, delays inserted to avoid static interference zones etc