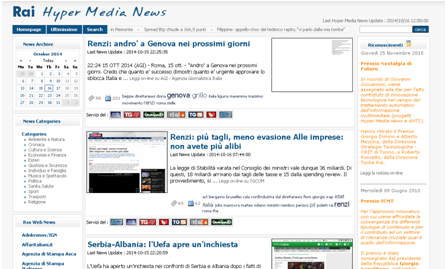 The operating principle of this system is based on an innovative technology for the hybrid aggregation of objects, that is the grouping of objects of different types such as the text articles found on information websites and the elementary units of television information generated by ANTS.

The developed technology also allows to select the representative elements of the groupings found, so as to allow the implementation of innovative information services, such as:

The RSS multimedia services are made up of the publication of RSS channels (an RSS channel is a web resource formatted according to the RSS specifications, an XML dialect, which represents lists of items in chronological order of publication) containing the groupings found by the system, organized in a manner sequential over time or indexed based on user preferences.

The Hot News services consist of the publication of daily reports containing the most important news of the day, with links to RSS services contained and automatically annotated with keywords (tags). The system maintains a historical archive of these reports, for possible future consultation. The Hyper Media News portal is shown in the figure.

The system offers more advanced users a visual navigation mode based on the representation of groupings in graph form. The user can visually select subsets of the graph, which correspond to subtopics of the main topic. Starting from the selected nodes, it is possible to take advantage of television clips and aggregated web articles, in a single synergic interaction.

All the fundamental technologies on which Hyper Media News, Newsbook and Active News are based have been designed and developed by CRIT.

These technologies won the 2010 Confindustria ICMT Media Driven Convergence award, presented to RAI by the then President of the Republic, Giorgio Napolitano.